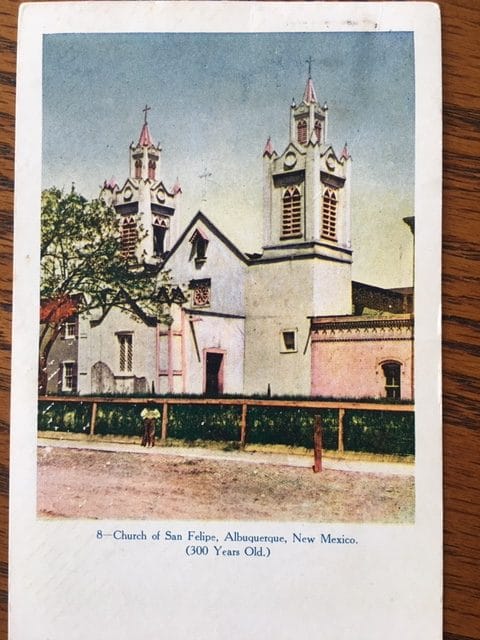 I bought this postcard of San Felipe de Neri Church in Albuquerque on a trip to Phoenix years ago at Antique Trove antiques store on north Scottsdale Blvd. I’ve kept it all this time without trying to decipher the message on the card. I just realized what we have.

This is a 1908 postcard of “8–Church of San Felipe, Albuquerque, New Mexico (300 years old).” It was apparently one of a series, so I wonder what at least the other seven were. It’s also incorrect, because the church was built in 1793, making it only 115 years old in 1908. Williamson Haffner Co. Publishers of Denver published many postcards and maps.

Charles Bottger arrived in Albuquerque sometime around 1893. Most likely he had tuberculosis and came to New Mexico for his health. He worked as the manager for Tom Post, who owned the Post Exchange Hotel (later the Sunnyside Inn), and married Post’s stepdaughter Miguela in San Felipe de Neri Church in September of 1897.

The card is addressed to “Miss B. Hoffmann, East Rutherford, New Jersey,” which is interesting because Charles Bottger’s family owned a meat market in Rutherford before he came to Albuquerque in 1893. The card is postmarked “Old Albuquerque, N. Mex.” Dated Apr 16 6 pm 1908, with a canceled 1-cent stamp.

Julia L. Bottger was the mother of Charles Bottger

The message that I finally really deciphered says: Dear Miss B. All your cards received and many thanks for same. All-though I have not written you I have not forgotten you. Sending you Easter Greetings. Will be home soon. Yours, Mrs. J. L. “B”ottger  The B in the name is in quotation marks, so would seem that “Miss B” was an affectionate reference between the two of them.

Common names in the Bottger family

Mrs. J. L. Bottger was Charles Bottger’s mother. It looks like she had come out for a visit and sent a postcard back to New Jersey. I have had limited success tracing Charles Bottger’s family. It appears that both Julia and some form of the name “Louis” are common family names. His mother was Julia L. Bottger, and Charles named his first daughter Julia L. Bottger. His brother’s name was, I believe, John Louis Bottger. I know that Charles’ mother died February 1, 1909 in Albuquerque and is buried in Fairview Cemetery. Did she become ill after sending this postcard and never make it home? Or did she come on a trip the following year? Charles Bottger’s family were members of San Felipe de Neri Church and Julia probably would have attended services or visited the church during her stay.

Unfortunately, there was a huge fire and the building where most of the 1890 census records were kept was destroyed. The remaining 1890 census information is extremely limited, so there is no information for either New Mexico or Rutherford, New Jersey. That would have been the year when Charles Bottger was a young man (age 18) and still living at home. That would have been the year to determine other siblings. I will have to go back to the 1880 census, which I have not looked at in a number of years. I don’t remember seeing any other siblings. Charles Bottger’s brother “J.L.” has been referenced in just a few other documents.

City directories can provide a lot of information

City directories go back to at least the 1880’s in Albuquerque and probably a lot earlier for older, more established cities. They provide a wealth of information. You can look up someone by name and also cross-reference by the street address. I was able to trace the Bottger Mansion property occupants, including its use as a grocery store, hair salon, art gallery, and even an ashram, through the years, including its latest use as a bed & breakfast with ourselves as owners! I found Charles Bottger’s advertisement for the Sunnyside Inn in the Albuquerque city directory of 1896.

It looks like I’ll be doing some more family research on Bottger and Hoffman in Rutherford, New Jersey.